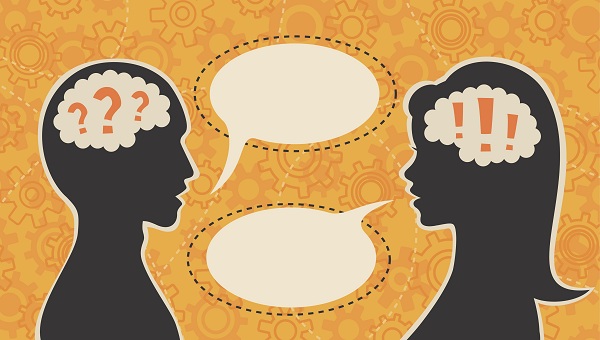 Sally said, “Use double quotation marks around whatever your character is saying. Within those, use single quotation marks if required — like the overused ‘scare quotes’ that denote skepticism. Same thing if your character is quoting someone else. For example, I decided to give this lesson because Tom said to me, ‘authors need help punctuating dialogue.’ Also, if I were to reflect on, say, the word ‘the’ as a word, quotation marks would also be appropriate. Please note that unlike italics, scare quotes are not an acceptable means of emphasis.

“Suppose your character keeps talking, but in a new paragraph. Don’t close the previous paragraph with quotation marks, but open the new one with another set of quotation marks. Then close it after their final statement.”

“It doesn’t matter how short a statement they make, each character’s words get their own paragraph,” said Sally.

“By this Tom means the commas, periods, question marks, and exclamation marks that come at the end of a phrase,” Sally clarified.

“Be careful not to over-write synonyms for ‘said,’” admonished Tom.

“That’s more a style tip, isn’t it?” said Sally. “And you don’t have to capitalize ‘said’ when it comes after a question or exclamation mark in dialogue.”

“That’s right,” said Sally. “Also, after you’ve attributed a statement with a phrase like ‘said Sally,’ you can re-open the quotation marks and have your character continue talking within the same paragraph.”

“Use either a comma or period after your attributive statement,” Tom said, “as is appropriate. Look at Sally’s previous paragraph or mine here for two examples.”

Tom added, “And capitalize the first letter of quotation, if it’s an independent phrase. Again, look at Sally’s previous paragraph or mine here.”

Sally noted that “all bets are off” if the quotation isn’t a independent phrase.

In such a case, this means there’s no comma and “no capitalization of the quotation’s first letter,” Tom explained.

But keep the comma if the attributive statement “comes after such a quotation,” Sally added.

“You don’t necessarily have to use ‘said’ or one of its synonyms in an attributive statement.” Tom looked thoughtful. “A simple description of a character, with dialogue on either side, can be enough.”

“If you’ve firmly established that only two characters are talking, you don’t even have to include an attributive statement.”

“Just make sure you start a new paragraph whenever a new character begins talking.”

“And of course, accurately open and close your quotation marks.”

“If this has gone on long enough, and your character’s statements are basically interchangeable, you might want to start attributing these statements again,” said Tom.

“You won’t have this problem, if a lawyer is firing a rapid series of questions at a witness, for example,” Sally said.

“In such a case, the roles of these two characters are clear enough that you can easily discern who is who.”

“The gruff detective will speak differently than the shy accountant he’s picking on, for example.”

“But if your characters are poorly-defined, it can be hard to tell who is talking, after a certain point.”